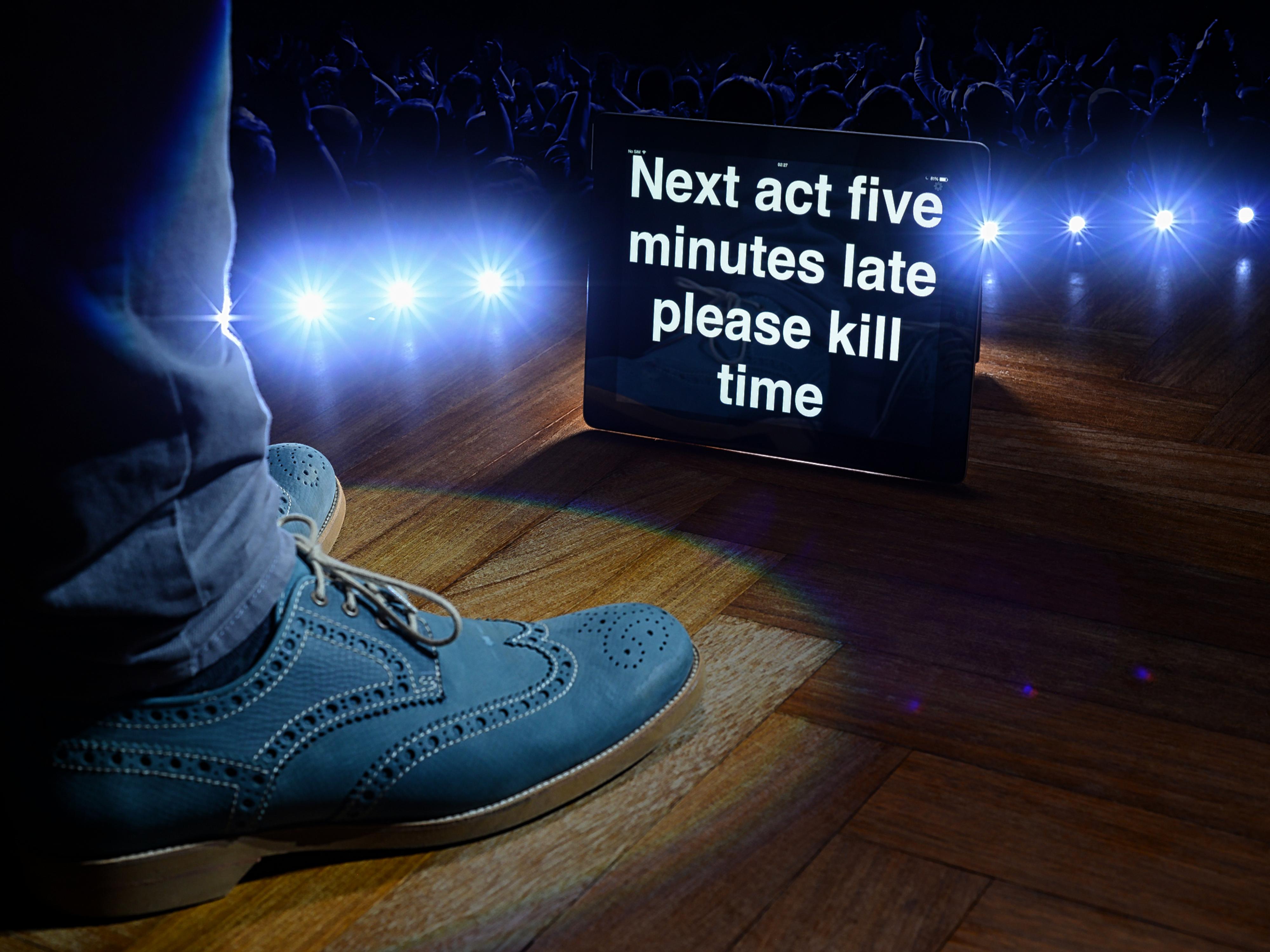 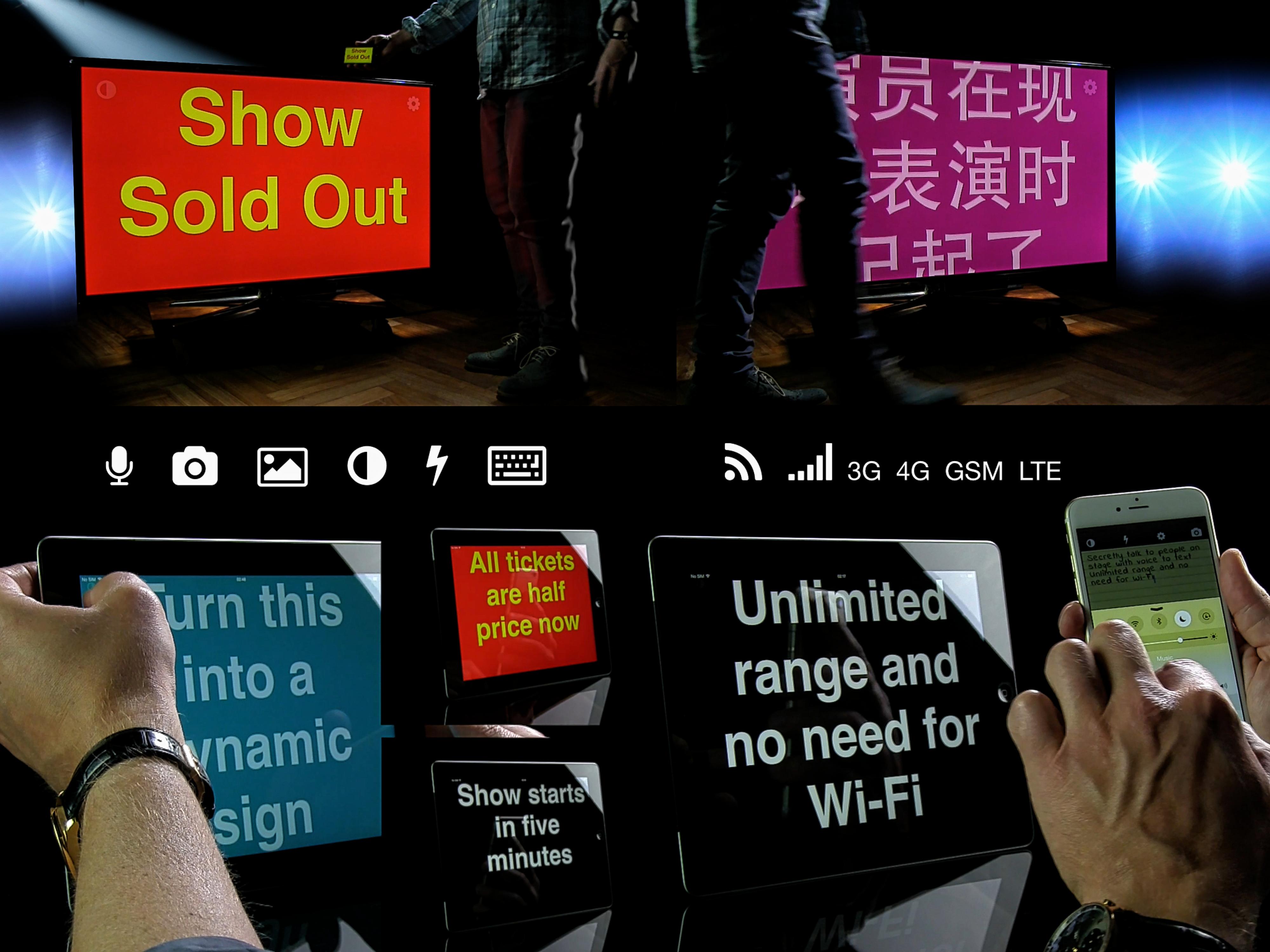 Secretly communicate with people on stage with InstaPrompter, a revolutionary stage intercom teleprompter. Drastically improve your live performance with our iPhone-to-Android LIVE teleprompter.

Secretly talk to people on stage with voice to text. Speak into your iPhone and large written words appear on iPads hidden in props or footlights. Actors, musicians, and speakers discreetly read this unscripted information during live events without anyone noticing. As a result they appear more competent, spontaneous, and on time.

Open this app on multiple devices. Hold one upright and type or speak. Hide the others sideways on stage and everything appears there in huge scrolling letters Teleprompter-style. Unlimited distance! It’s a Teleprompter that ate WhatsApp, Skype, and Siri.

This year alone, InstaPrompter helps over 16,000 actors remember 200,000 forgotten lines during live performances. It assists 9,000 speakers answering 34,000 unplanned questions at press conferences. It prevents 22,000 comedians from going over time and forgetting the next act’s name. And it's “misused” 68,000 times to announce drink-specials at bars.

For those who need to be reached but aren’t supposed to look at a phone. Be it on stage or in front of cameras. Stage managers and theatrical professionals will love that the stage intercom system finally extends onto stage to improve live productions, saving time and money.

What it excels at:

*Super easy to use and set up *Words appear as you type to save valuable seconds. *Unlimited reach thanks to cloud-streaming. *Voice recognition for lousy typers. *Blink, color-change, gong for cues and announcements. *Passworded feed so you can use any borrowed iPhone, iPad, Android and volunteers who simultaneously prompt onto stage. *Yeah, it can stream pix and use your camera. *Dimmable fake notepad-look so you can sit in the audience and pretend to be a journalist instead of a prompter. *Invertible type for mirror reading and teleprompter rigs. *No Wifi or Bluetooth required; 3G is fine: Prompt from another country! *Save with cheap Android tablets because this app is on Google Play and Apple’s App Store. *Use InstaPrompter for Mac and PC for faster typing (coming soon) *AirPlay and Chromecast support for large screens and projectors to misuse the app for dynamic signage and live subtitling at events.

If you're a stage professional you'll instantly recognize InstaPrompter's value. You'll also be amazed about its unusually low price.

For Android AND iOS

Your team can use their own devices and aren't locked in by a specific brand or operating system. Android and iOS in harmony, for once...

- Only one app required: InstaPrompter is now universal and can send or receive messages in real-time from one and the same app.

- Vertical and horizontal operation: Open this app on multiple devices. Hold one upright (looks like note pad) and type or speak. Hide the others sideways on stage (looks like a Teleprompter) and everything appears there in huge scrolling letters Teleprompter-style.

- Ad-removal (Android only, iOS has no ads) is now stream-wide, not per device: Instantly no more ads on all your devices and everyone's device on your team, saving you time and money. Tell new members to download the free app and give them your stream name; they'll be ad-free immediately.

- AirPlay support for large screens and projectors to use the app for dynamic signage and live subtitling at events.

- Camera access: Shoot photos right from the app and have them appear on iPads or huge screens a few moments later. Custom graphics in your photo roll can be sent in real-time too.

- Interface enhancements so you can permanently install a tablet on stage, in a Teleprompter rig, or inside a prop and still access stream settings and colors easily.

- Speed enhancements: Even a lousy 3G or LTE connection will display words as you speak or type, giving you unlimited range, independence from WiFi, and thus superior reliability.

- New dimmable fake notepad-look so you can sit in the audience and pretend to be a journalist instead of a prompter. The dimmer prevents distracting light-spills, yet maintains high legibility similar to night mode in e-book readers.

- Stream permanence: Only enter your stream name the first time you open the app and your device will remember it next time you start InstaPrompter. You can switch streams and passwords in settings.

- Quicker first-run: One single input box serves as a stream-creator and/or a login box so you can borrow phones or use volunteers without wasting time.

- New tutorial videos explain every feature. Not that you need them because the app is extremely intuitive to use. But your boss might want to be convinced how cool this product is.

The reviews are in!

© Copyright 2022 Hottrix®
No parts of this website may be reproduced without permission.
Hottrix® is a registered trademark with the United States Patent and Trademark Office